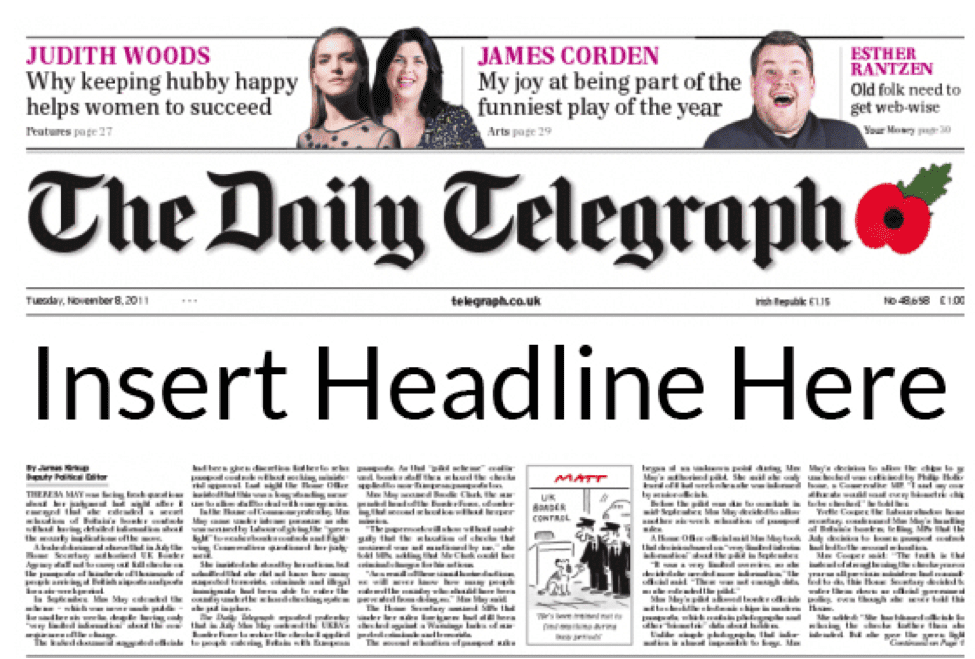 A headline is a two-second tryout for people’s attention. It’s a short snippet that must grab a reader from the distractions of the world and engage them with your content. That’s quite a tall order, considering how much fun it is to look at pictures of friends’ cats and read about the latest celebrity scandals.

But some people can write great headlines over and over again. They seem to have figured out the formula and are nailing every audition for interest. Luckily, some of them are willing to share their secrets. Here are ten examples of great headline writers and how they come up with those attention-grabbers.

Take Your Headline on a Roadshow: Jimmy Orr, LA Times

Jimmy writes four to five headlines, and then walks around the newsroom asking for feedback from other journalists and copywriters. The feedback he receives is valuable because he is able to witness firsthand how people react both verbally and physically to his headline.

How will the headline look on Twitter? How about on Google+ or Facebook? With social media driving significant traffic to websites and articles, it’s more important than ever to write headlines with your social readers in mind.

The expectation at Upworthy is to write 25 headlines before publishing any post, no matter how short. There’s a great reason for this. See, after about 20 headlines, your ideas start to get a little weird and off-the-wall. That’s where the real magic happens. Instead of just going with the first headline that comes to mind, give yourself some time to get creative.

How Simple Can It Get?: Chris Moran, The Guardian.

Think about all the places your headline will appear out of context – RSS feeds, Twitter, blog mentions , etc. There are a lot. That’s why the Guardian’s Chris Moran always keeps it simple. How? He starts with a headline idea and then simplifies it over and over again until anyone can understand it, no matter where it appears.

First, get informed. Second, narrow down your ideas. Third, rewrite good headlines. Fourth, put your own spin on the title. MOZ claims that this formula for generating headline ideas is so dynamite it should be illegal. Let’s dig into it a little bit. Getting informed also means getting inspired. Comb through the relevant content already out there and compile a list of your favorites. Then, narrow down that list to your absolute favorites. Rewrite the headlines of those articles and put them in the tone of your site so as to create a continuous brand experience.

Matthew Winkler relies on three main tactics to develop his headlines: 1.Write story templates in advance of events. 2. Identify the top ten influencers in your space and what their views on issues are. 3. Know how to reach sources at a moments’ notice. These are the things that help Bloomberg create 5,000 pieces of content—and headlines to introduce that content—every day. Prudent planning is the key to perfect publishing.

“Watch Drunk Frat Boys at the University of Albany Destroy a Car.” That headline pretty much says exactly what the content is about, but you still want to see it. If you can tell the whole story, but leave out the most vital piece (in this case the actual video), you’ve got a headline that attracts interaction.

“How You Can Effortlessly Sell Your Home In 24 hours” is a great alternative to “How To Sell Your House Quickly.” You could have written a great article on how to sell a house in a short period of time, but if you can’t convey the worthiness of that article with a headline, it won’t get clicked. Jeff Goins’ formula is a great one for coming up with an interesting way to title a run-of-the-mill subject.

In a 50,000 visitor test, headlines pointing out benefits consistently beat headlines that asked questions or showed how to avert negatives. There’s something about positives that we as humans love, and that shows in how we engage with articles based on their potential benefits. Find the good things about an issue and turn that into the headline.

Headlines are the first—and many times the last—interaction readers will have with your writing. The common theme among these great writers is a heavy emphasis on the headline writing process. What will yours be?