App Discovery 101: 6 Ways to Get Your App Discovered By Your Target Audience

Getting your app discovered isn’t easy – your app no doubt has tons of fierce competition, and mobile users often feel overwhelmed by the wide selection of apps for every need under the sun.

So how exactly do you get discovered by your dream audience? You know, those people who would definitely download your app in a heartbeat, if only you could get it in front of them!

Today we’re highlighting five ways to boost your app’s discoverability and unite you with your perfect users.

App Store Optimization or ASO, is undoubtedly the most important element to getting your app discovered. Similar to SEO, ASO is simply optimizing your App Store listing for organic discoverability through optimization. For a deep dive into ASO, check out this blog. Below is a checklist of all the key elements of ASO: Getting in the App Store’s top apps list is a tremendous achievement, but not easily do-able – especially not organic!

Instead, try running a CPI (cost-per-install) campaign, where you’ll pay out for each install of your app. In some cases, you may end up paying more than the life time value of the customer is worth, but the boost in installs may be worth it alone. That boost could get you into the App Store’s top charts, which brings enough attention to make any money spent well worth it.

Apple App Store ain’t everything – there are plenty of other places and networks to share your app with the world!

Let’s start with other app stores. In addition to Apple’s App Store for iPhone apps and Google’s Google Play store for Android apps, you can also submit your app to:

In addition to submitting your app to additional app marketplaces, you’ll also want to take advantage of various mobile app acquisition partners who can drive attention to your app from inside other apps and web properties. Facebook also lets you target lookalike audiences if you use the Facebook SDK in your app. This allows Facebook to create custom audiences based on specific user activity from inside your app. This, along with a host of other great audience targeting options, makes Facebook a truly powerful option for reaching your most coveted app audiences.

We actually have an entire guide to setting up a Facebook app acquisition campaign – read it here!

However, there are plenty of other mobile ad acquisition partners to team up with, each with their own app networks and audiences. Some can help you create gorgeous, cross-medium campaigns that will really wow viewers. Some adverting partners can help you set up retargeting ads too, which often prove more effective than traditional ads.

Regardless of where you intend to focus your advertising dollars, always make sure to track and evaluate the users you get from different advertising mediums. Do Facebook-acquired users end up having the highest LTV? Or do they churn more often than Google-acquired users? Track and measure to see which sources drive your dream audience!

4. Get the Word Out By Running a Contest

It may sound simple, but running a contest is still one of the best ways to get the word out about your app. Announce a contest that involves giving away a certain number of users your app for free. If your app is free to download, consider giving away premium memberships or in-app currency.

As part of the contest design, allow users to get additional entries for tweeting about the contest or posting about the competition on Facebook (Rafflecopter is one contest app that can set this up easily), furthering your traction and getting your app’s name out and about.

With so many folks tweeting or posting about your contest, even users who don’t volunteer to participate may hear your app’s name for the first time – and that brand recognition can be hugely valuable down the line!

Depending on your niche, partnering with industry bloggers is a great way to get noticed. The more specific your niche is, the better your chances are of getting hooked up with your ideal audience by way of bloggers.

For example, a music-streaming app might have a tough time implementing this, as trying to reach out to any blog that discusses music would be a pretty large endeavor. It’s simply not a specific enough niche.

However, an app specializing in recognizing and interpreting birdcalls will have a much more narrow audience. A birdcall app could easily reach out to bird watching bloggers to enlist their help. Offer your app to bloggers for free in exchange for a review, pay for a sponsored post, or set them up with an affiliate tracking code that allows them to get paid when a user downloads your app through their promotional link.

This can also be done with vloggers on YouTube. In fact, many would argue YouTube is a superior medium for app promotion since your app’s visual components and UI are more translatable via video than still images.

Many YouTubers make a living out of just reviewing apps – reach out and see if they’ll feature you!

Another way to get in front of your target audience’s eyeballs? Enlist current customers to be your advocates! 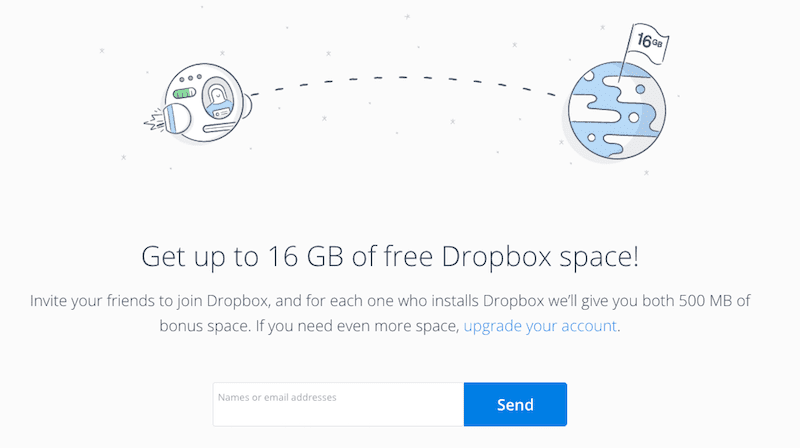 Simply offer your current customers some kind of bonus or benefit in exchange for promoting your app (whether that’s through email, text, or social media).

Dropbox is a often-heralded example of how to succeed with this method. When users first sign up, Dropbox offers them the option to get an addition 500MB of space for every friend they get to sign up. Users can accumulate up to 16GB this way, if they’re high school cheerleader level of popular.

Try offering your own users a similar incentive – like a week of premium service for every friend they get to install your app!

Remember that word-of-mouth referrals are much more powerful than traditional ads, so it’s definitely worth experimenting with this method to see how it might benefit your biz. Plus, by encouraging users to refer friends, you’ll be more likely to get in front of your key audience (a fan of birds will probably only refer other bird watchers to your bird call app).