While many marketing campaigns go in one ear and out the other, some are marketing gold. These campaigns are clever, timely, and opportunistic and make a lasting impression on audiences.

We can all benefit from taking risks, thinking more creatively, and finding humor in the metric-centered world of marketing. Here are five more clever, timely marketing campaigns: This promotion could not be more timely. With Deez Nuts all over the interwebs, some clever marketing person at Frontier saw an opportunity and snatched it up. “Deez fares are nuts,” the company said on their website and in emails. “Get 50 percent off with Promo Code: DEEZNUTS.” The promotion is a bit of an endorsement for a fictional presidential candidate submitted to the Federal Elections Commission Filings by a 15-year old Iowan named “Deez Nuts”.

I can’t speak to the impact on website traffic and sales generated by this campaign, but I do know that the promotion gained a ton of press for the notorious deal slashing airline. Despite the exhausting and tiresome presidential election season, it’s refreshing to see some humor come out of it. Plus, cheap airfare is always something to go nuts over.

2. “The Dress”
You may recall a time back in February when the internet lost its mind over the color of a dress. It all started when Scottish singer Caitlin McNeill posted a photo of her dress on Tumblr, asking for consensus on the color of the dress. Was it blue and black or white and gold?

People chimed in across multiple social media channels and national news stations to voice their opinion on why the dress was a certain color combination. Brands even jumped on the dress color debate bandwagon: LEGO found a way to have your blue and your gold Tide claimed the issue could be solved with proper laundry care 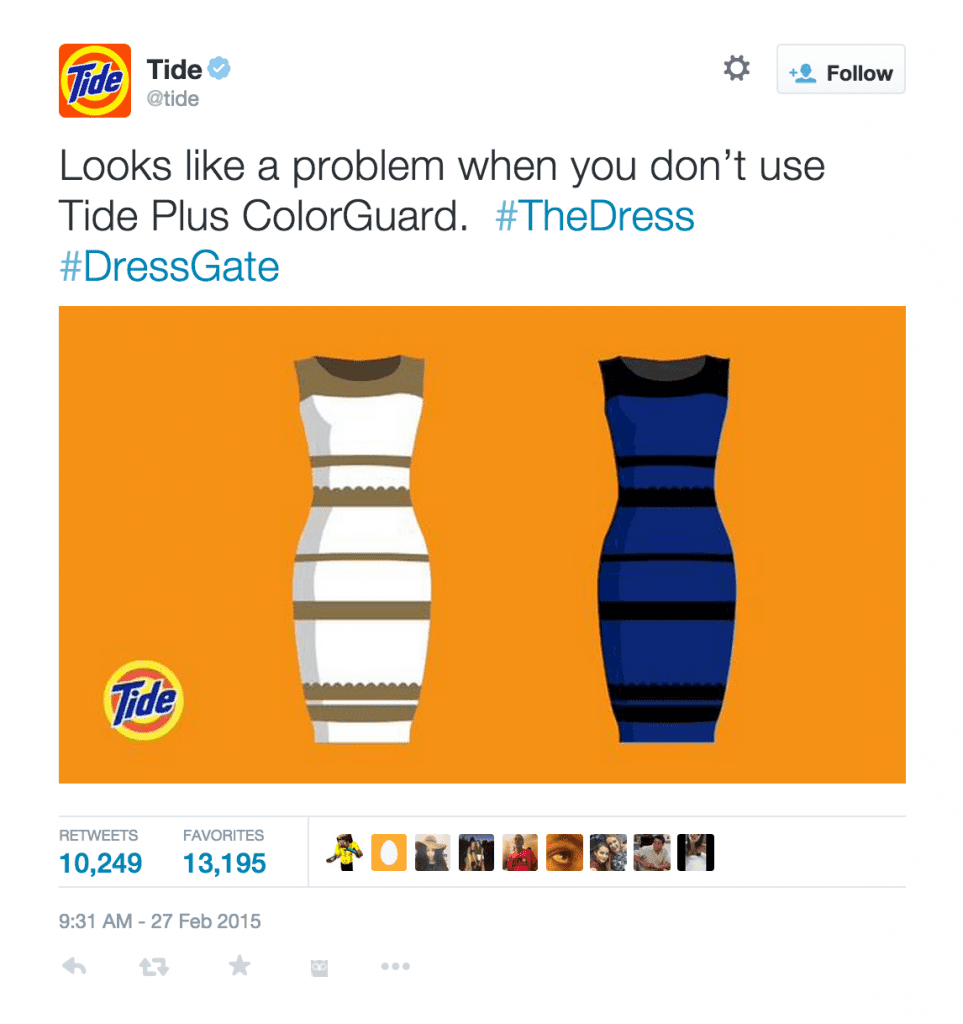 Check out all the other creative brands that jumped on the dress color debate wagon.

If you’ve been on social media recently, you’ll have noticed the stream of black and white profile pictures declaring “Straight Outta…(somewhere).” The headphone company, Beats by Dre, created the Straight Outta Compton meme to promote the new movie about the rise of rap group N.W.A. The meme generator inspires people to fill in the blank with their hometown in the signature design of N.W.A. Within 9 days of the site’s launch, over 7 million people visited the site, 6 million people created memes, and over the course of two days, #StraightOutta was retweeted more than 15,000 times per second. People and brands couldn’t help but relish the opportunity to get a little creative and silly. Here are a few gems: 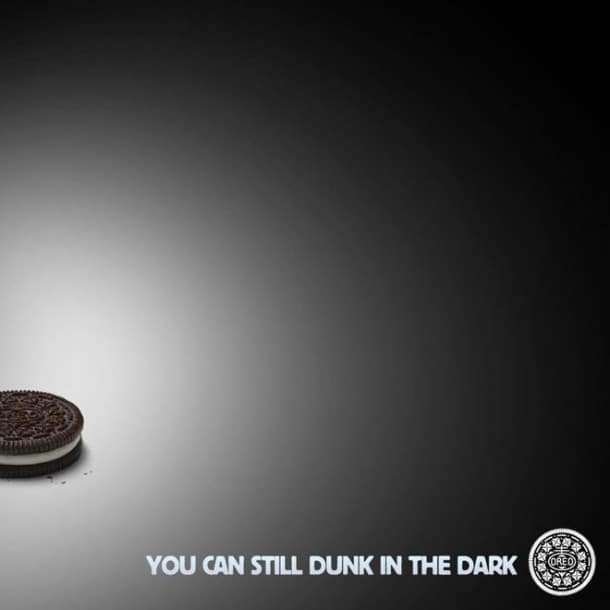 If you’re a football fan, you may remember a moment of darkness during the third quarter of Super Bowl XLVII. The power in the Superdome went out for 34 minutes, causing advertisers to think on their feet quickly. No brand pulled off more of a timely and creative response than Oreo.

The team tweeted, “Power out? No problem,” with a dimly lit image of a lone Oreo and the caption, “You can still dunk in the dark.” The message caught on almost immediately, gaining nearly 20,000 retweets and more than 20,000 likes on Facebook – pretty impressive for a one-off joke made by a cookie. This quick and clever thinking is not a new concept for Oreo; they’re huge proponents of culturally relevant content, as seen with their Daily Twist program.

When the US Supreme Court Decision broke regarding marriage rights for everyone in all 50 states, people rushed to the scene to express their support for #LoveWins. Facebook turned the world into a beautiful rainbow by allowing people to put a multicolored filter on their profile picture. Google created a rainbow homepage. And brands from every industry sparkled a little brighter and a little more colorful. Here are a few of my favorite brand responses for #LoveWins: Gap – Equality is always in style. If you want to see more colorful reactions for #LoveWins by big brands, check this out.

Show me a demo