21% of Users Abandon an App After One Use

Consumers have historically been extremely picky about their apps, but now more than ever they expect to be truly immersed. Personalized messaging, unobtrusive experiences, rich content, and a host of other features are crucial elements that make for a great user experience. Anything less and users will decide that their time is better spent elsewhere.

Today we are releasing an annual update to our app user retention study, which measures loyalty and abandonment across our user base of 37,000 apps. Our study focuses on two key metrics:

App abandonment is on the decline

21% of users now abandon an app after one use. This number shows significant progress since 2015, when 25% of users used an app only once. But, the fact that one in five users will never launch an app again after one session is alarming. There is still progress to be made to keep users from jumping ship before they see the value of your app. Since 2012, app abandonment has dropped one percentage point to a solid 21%, still slightly above its 2014 level. It remains tough to keep users engaged, but it’s clear that app owners have been utilizing the tools at their disposal to keep us interested. We will cover some ways to keep the average user on board later on in this post.

In tandem with the changes in app abandonment, app retention has improved noticeably: 38% of users launch an app eleven or more times, compared to 37% in 2017. This is just below the maximum of 39% in 2014, but still represents an upward trend from 2012, when it was just 31%. 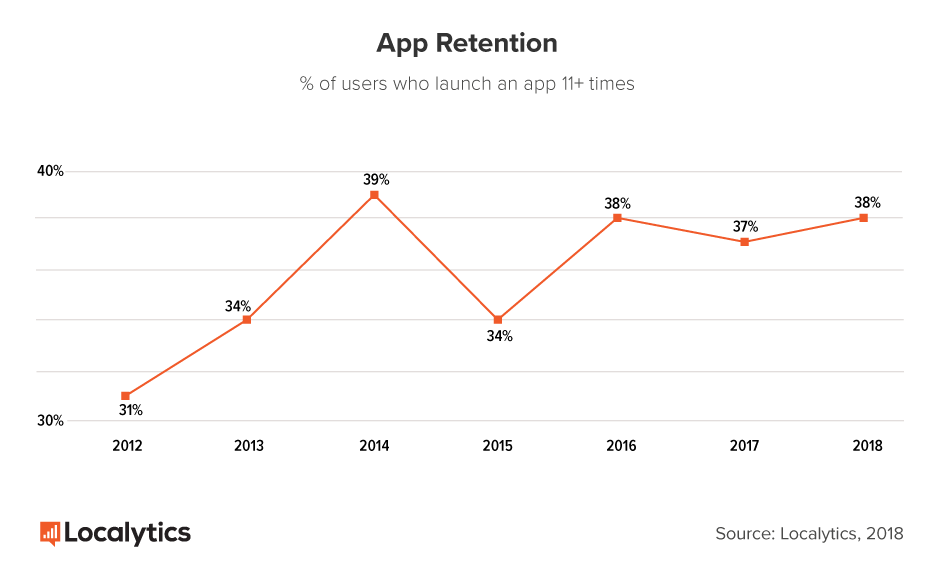 In order to understand what drives low abandonment and high retention, we dove into the data, uncovering key elements that point to an effective user retention strategy. In addition, we found out more about what is driving the improvement over past years.

The iOS experience keeps users coming back for more iOS retention will likely continue to increase as long as Apple maintains a strict culture around app design and engagement, including disallowing automatic push opt-in. Android leaves push notification reminders on devices’ lock screens, whereas they disappear after unlock on iOS devices to be stored in the notification center. These types of constraints incentivize developers to “cozy up” to iOS users, to offer them instant quality from notifications and a better overall experience to obtain the opt-in. A crucial element of app marketing is getting users onboard with the experience and convincing them that it is in their best interest to receive pushes. Which leads me to my next point….

Getting the opt-in is essential to great retention

Time and again we find that users who opt in to push are more likely to stay in the app. This has not changed – users are still less likely to abandon an app after they initially invest by opting in. We find that only 8% of users abandon apps on the first session if push is enabled. Since iOS users do not have push automatically enabled in-app, this percentage jumps to 11% in the second session. Finally, 46% of users who have opted in to push spend 11 or more sessions in the app. Nearly 50% of users will use an app 11+ times if they opt in to push. That’s how important it is to convince users to opt in. Compare this to retention for users who disable push. Since Apple does not allow developers to automatically opt users in to push in their first session, this number is a good deal higher than it realistically would be if all users were opted in.

An ode to targeted pushes Users’ fickle attention will always be a challenge for businesses to overcome, but never fear! Tools such as in-app messaging, rich push, audience targeting, and onboarding processes are effective ways to give your app an edge. To dive into some more juicy data, check out our most recent benchmark reports.

Localytics is the leading mobile engagement platform across more than 2.7 billion devices and 37,000 mobile and web apps. Localytics processes 120 billion data points monthly. For this analysis, Localytics measured the percentage of users who only used an app once as well as the users who returned multiple times. For the push opt-in analysis, we compared the percentage of users who did or did not return to apps who opted in to receive push messages in their most recent sessions. For the targeted vs broadcast analysis, we examined apps that send either a majority (>50%) of segmented campaigns against apps that send a majority (>50%) of broadcast campaigns. The timeframe for this study was May 1st 2017 – Feb 28th 2018.