Whenever we discover new best practices for mobile campaigns, we’re always eager to share them with our customers  (and the world at large). And we’re particularly excited about this latest tactic, because so far it’s had great results.

Adding a mobile field to your web forms can be a quick way to bring in new members to your mobile list. That’s as simple as it sounds. Just add a field on your online signup forms that requires mobile numbers, and your mobile list could quickly grow.

Organizations as different as the Nature Conservancy, Everytown for Gun Safety, and Voto Latino have all seen significant list growth with no drop-off in conversions.

The Nature Conservancy’s forms now have a mobile field, contributing to the organization’s massive mobile growth.

No Dropoff in Conversions
Many organization worry that adding a mobile field might deter supporters from completing their forms. But our customers’ research shows that’s not happening.

People are now used to giving out their mobile numbers for anything from restaurant reservations to air travel. In fact, studies have shown that people get annoyed when businesses won’t communicate with them over text.

Furthermore, as our case studies below show, mobile subscribers are more loyal and more inclined to give money. 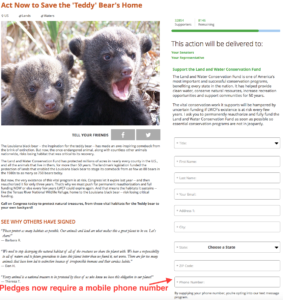 The Nature Conservancy Grew Its List 800% By Adding Mobile Fields
When The Nature Conservancy discovered that the average donor with a mobile number was giving significantly more than those without, they made an organizational commitment to mobile and added mobile fields to their web forms.

With that one simple change, The Nature Conservancy grew their list of mobile numbers by about 25,000 in a single month, with no noticeable drop in form completion.

Moreover, they found that people who gave their numbers were some of their most enduring supporters. Around 80% of people who join Everytown’s lists via web form are still with the organization after a year. That compares with as low as 50% for those who come in other ways.

Voto Latino Brought in Thousands of New Registrants by Adding Mobile Fields
When Voto Latino added mobile fields to their forms, they saw a dramatic uptick in SMS subscribers.